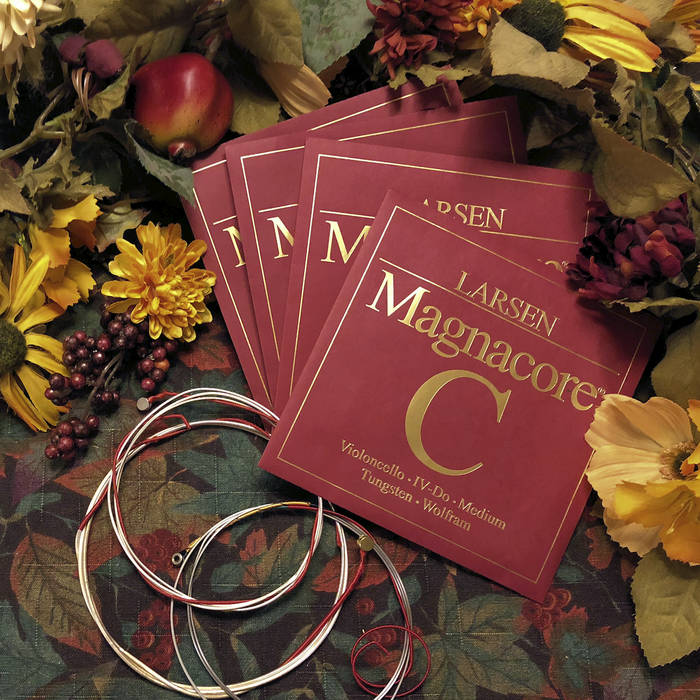 Here in the Northwest, it's been a beautiful fall so far, with lovely clear days and chilly nights - resulting in a lot more autumnal color than we usually get here. It's even been dry enough that the fallen leaves crunch underfoot and blow around in the breeze! (In a typical Pacific Northwest fall, the leaves just turn brown and fall off, and then become a soggy floppy mess underfoot; this year's "New England style" fall has been a rare treat!)

A few weeks ago, I invested in new strings for both of my cellos (which I do far less often than I should, since a new set of strings runs about $400 per cello). Many, many thanks to all of you, my dear subscribers, for making it possible!

The process of changing cello strings can be a bit traumatic for both me and the cello. Cellos can be really picky about which strings they like (or hate) - and you can't return cello strings once they've been installed, even if they sound terrible on your particular cello. As a result, buying new strings can be a bit terrifying! It's not so bad with Raven, my carbon-fiber cello, because I always get the same strings for him, and after a difficult first week (during which both strings & cello are still adjusting to each other), they always end up sounding just fine. But Godiva, my studio cello, is a bit of a diva; she is nearly 100 years old and made of wood, and has changed subtly in the past 20 years. As a result, the strings I always used to get for Godiva don't sound good on her anymore. So this time, I decided to try a different brand (Larsen, the same brand I use on Raven). I didn't know what to expect - I was just hoping she wouldn’t hate them (she has hated other brands in the past).

And wow, when I put the new Larsen strings on Godiva, she became a completely different instrument! Her sound went from an introverted, warm, woody tone to a bright, reverberant shine -- louder, clearer, and with a lot more reverb. I wasn't sure I liked the new sound, but decided to give the new strings a few months to "play in" before giving up on them. I also realized that I needed to find out how the new strings sounded when recorded (since I normally record using Godiva).

So I sat down at the mic with the newly re-strung Godiva, put my monitoring headphones on (so I could clearly hear what was coming through the mic) and began to play, with nearly all of my attention on the sound of the new strings - their shine and complex overtones and quick response and long sustain. I wasn't paying much attention to the notes I was playing -- it was just improv; my focus was on those strings. And when I went back to listen to the material I'd recorded, I found that not only did the strings sound decent in the mic, but the stuff I'd been playing wasn't bad, either.

This piece, "First Dance," is the first thing that came out of Godiva while I was exploring the sound of her new strings. I haven't added any reverb or other effects to this recording; this is the actual sound of the cello, as recorded in my (sound-dampened) studio. (Hopefully these strings will settle down over time; I won't always want THAT much reverb!)

Thank you -- each and every one of you -- for subscribing to my Bandcamp! I couldn't do what I do without it!