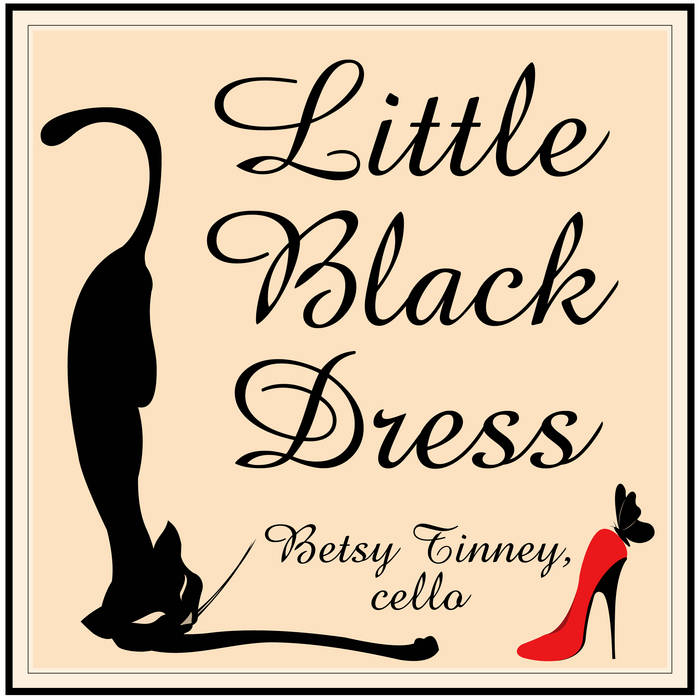 This piece is a slinky sultry homage to -- you guessed it -- the Little Black Dress. (And also to a sleek and slinky black cat, who really wanted the song to be named after him. But I already have a slow and sultry song, Sleepy Leopard Blues, named after a cat -- -- so this time, the dress wins.) I wasn't thinking of a specific little black dress, but of all the sweet sultry snazzy little dresses that have been patiently hanging out in everyone's closets for the past 14 months, becoming more and more morose and wondering if they'll ever be worn again.

(In my head, while I was recording this piece, I was in my own favorite slinky little black dress, swaying with my sweetie in a dimly-lit speakeasy, while the antique chandeliers threw sparkles across the dance floor and the sleepy, sultry music of the last dance curled around us.)

Against a cream background with a black border, the silhouette of a slinky black cat stretches down the left side of the image. His gracefully-curled tail is in the top left corner and his head is in the bottom left corner. In the bottom right corner is an elegant scarlet pump with an impossibly-high spike heel; the black silhouette of a butterfly perches on the back of the shoe. The cat is regarding the shoe (or, more likely, the butterfly) with tilted head, slanted eyes, and determined curiosity; he stretches one long, sinuous paw out across the bottom of the frame toward the tantalizing pair. The title, in large curly script letters, reads "Little Black Dress" and, below in smaller letters, "Betsy Tinney, cello". (There is no little black dress pictured, since this song is about the Everydress, and actually depicting a specific dress would ruin everything.) Graphics licensed from the individual artists via Dreamstime.com. Black cat image by Tea; red shoe image by Roberto Atzeni.